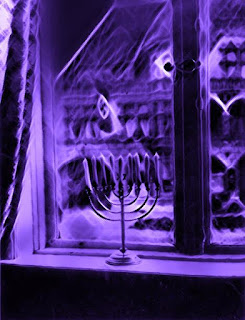 “If we all do as our kindred have done
and refuse to fight for our lives and for our ordinances,
they will quickly destroy us from the earth.”

“I am now quite certain that the crimes of this guilty, land:
will never be purged away; but with Blood.
I had as I now think: vainly flattered myself
that without very much bloodshed; it might be done.”

in these cold nights,
voices ride the wind:

meanwhile, the faces change,
but the story stays the same:

He shed much blood,
and spoke with great arrogance.
The people mourned deeply
in every community…
young women and young men
became faint…
Even the land
trembled for its inhabitants…

and police joke about brutalities over lunch
and troops gather at the border
to unleash tear gas on children seeking asylum
from unnatural disasters in Honduras
(where U.S. troops are still stationed,
while more wait in Afghanistan, Iraq, Russia, Japan, and all across the planet)
and bombers fly routinely over China's waters,
while Chinese children compete with computers
to make more computers
and wages everywhere drop
like bombs
and families around the world open empty cabinets
while perfectly good food sits on the shelves of stores
until it is thrown into dumpsters
and the dumpsters are locked.
and shiny shops spread through the city like boils
while rents soar
and more and more
residents move out (to where?)
and the unhoused gather on the corners
and outside our grocery stores
and places of worship

for the citadel became an ambush
against the sanctuary,
an evil adversary of the people
at all times.
On every side of the sanctuary they
shed innocent blood;
Because of them
the residents of the city fled;
she became a dwelling of strangers;
she became strange to her offspring,
and her children
forsook her.
Her sanctuary became
desolate like a desert;
her feasts
were turned into mourning,

and storefronts close,
and factories rust,
and leaded water runs through our taps,
and another shelter is shuttered in Uptown,
(the list of friends I pray for grows longer every day)

and Lew and Diana take their children
and teenage grandchildren,
and now their infant great granddaughter
into their small apartment

while violence spreads and closes in
around everyone I know

Alas! Why was I born to see this,
the ruin of my people, the ruin of the holy city,
and to live there when it was given
over to the enemy…
Her temple has become like a person
without honor…
Her infants have been killed in her
streets, her youths by the sword of the foe…
All her adornment has been taken away;
no longer free, she has become a slave.
And see, our holy place, our beauty,
and our glory have been laid waste…

until the star of David represents Apartheid
and the stars and stripes look like babies in cages
and Lady Liberty seems to be shouting Heil Hitler!
and the Scales of Justice stand for currency exchange

and in this world,
what does a Menorah mean?
or the million lit-up mangers?
or the eagles on our currency

(the money that multiplies
as it kills off the actual eagles)?

Will Harriet Tubman tolerate
her face being placed on a twenty-dollar bill
(her likeness woven into the very sinew
of Andrew Jackson’s on the other side)?

And who will remember, this December,
as they light the Chanukkah candles,
the murder of Fred Hampton in the night
and who will light one for Wounded Knee,
and Standing Rock,
and tell their children why,
at the camp of the seven council fires,

The U.S. flag was flown inverted
because a nation is in peril
when it places its first people last
and values the deadness of oil
over the sacred waters of life?

And who can explain
why the flag with a serpent is waved
by Zapatistas in the mountains
and the government that hunts them?

Or why, tonight, when we light these candles,
we think of these courageous and their deeds

so that one day
only prayers might still remain

For these, tonight, and every year,
we light and burn these flames:

One
for John Brown

One
for Harriet Tubman

One
for Fred Hampton

One
for Standing Rock

One
for the person without a warm place to go tonight

One
for the children born in the cold

and One for us,

that we may become worthy
of this prayer

who light candles
in the darkest of times

and in the most dangerous
of places
Posted by Adam G at 10:31 AM No comments: 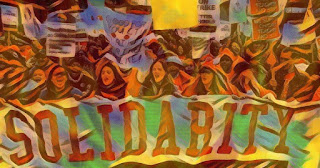 Which Side Are You On?

Eyes on the Prize

Hold on, hold on,
keep your eyes, on the prize, hold on!


We Shall Not be Moved

We're striking for our students,
We shall not be moved...

We want nurses and counselors,
We shall not be moved...

The people are behind us,
We shall not be moved...

We won't be tricked or bullied,
We shall not be moved...

This is the Year
after Martín Espada, and all visionaries

This is in fact the year that squatters evict landlords,
as we occupy all streets / all city halls /

Let the prisoners be freed
Let the refugees return
Let the workers get some rest
Let the organizers sleep
Let the students learn
Let the teachers teach
Let the truth-speakers read novels
Let the poets write about rivers
Let the rivers fill with fish!!

Let the land and everything it holds exult!

& Praise you People / praise your Rage
come ye drummers / come ye sousaphones
come you hordes of righteous screamers
Bless this Music of your thirst
for Justice, your hunger for Love

This is the year we impeach the whole damn system

This is the Year that Water Protectors on horseback
storm the White House & light the 8th Council Fire on the lawn,
& the youth of D.C. swarm to join
& cover that building's bloody whiteness over
with prophetic technicolor graffiti!

This is the year that banners unravel
& barbed-wire fences crumble,
the year wage-slaves take over
as the stock market topples

and we'll give what we can
and take what we need...
This is the year food & clean water are free
& gas is too expensive for everyone
In fact This is the year we remember why
we cannot buy
or sell the Earth -
(we are Her)

If Occupy began as a vision
of people having the debts that crippled them cleared,
then This is the year...

Let all the trees of the forest sing for joy
before the Eternal...

Let the rivers clap their hands,
Let the mountains sing in chorus!

and if eyes are eyes,

... so may every silent mouth,
dry as thirsty dirt,
Open
with the music
of Justice.
Posted by Adam G at 6:50 PM 1 comment: